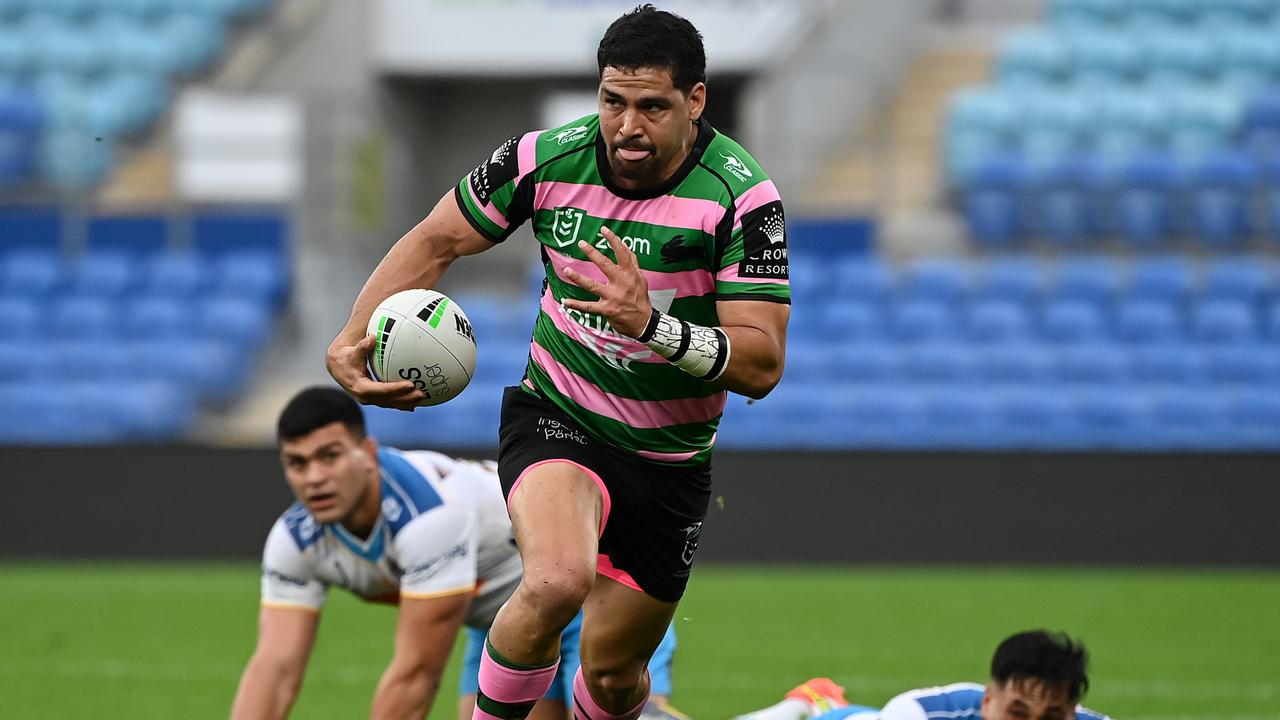 The Rabbitohs’ silky backbone of Cody Walker, Latrell Mitchell and Adam Reynolds ensured a record-breaking time out for his or her aspect of their 36-6 win over the Titans.

Listed below are the important thing takeaways from the match.

All the talk has been around Tom Trbojevic and rightly so, but Souths’ five-eighth Cody Walker showed why this year’s Dally M Medal race will come down to the wire.

Walker became the first man to notch up 50 linebreak assists in a single season since records have been kept with a brilliant assist for Braidon Burns in the first half.

Steve Roach and Mutt Russell were in disbelief over Walker’s incredible record after he produced another three linebreak assists and three try assists against the Titans.

“He just mixes his game up so well Walker,” Roach said.

“He pounces on the offload, squares up Brimson and puts Burns over.

“Walker just bounces straight out of the tackle and once he is in the clear he straightens up and finds Burns.”

“We talk about the milestones Cody Walker is setting that is his 50th linebreak assist this season,” Russell said.

“50 for Cody Walker. No one has hit 50 in a season since the stats have been kept. The first man to do it is Cody Walker.”

Roach explained the fact that Walker can beat you in so many ways shows just how hard he is to defend.

“It is just so hard to play against Cody Walker,” Roach said.

“You just don’t know what he is going to do. He has got tricks everywhere.

“He runs, kicks, passes. That time he ran and busted out of the Herbert tackle.

“Once he broke free it is all over. He just sets it up beautifully.”

The Rabbitohs became the first team to score 30-points in eight straight games with their victory over the Titans setting an all-time mark.

The Storm may have been the best attacking team all season, but Souths are peaking at the right time of the year and they are leaving all sorts of records in their wake.

“For the first time since the game’s inception in 1908 a team has hit 30 points for eight consecutive games.

“Hard to believe, but there it is a rare piece of history for the Rabbitohs of 2021.”

That wasn’t the only record reached with star fullback Latrell Mitchell equalling a famous mark from Warriors winger Manu Vatuvei in matches against the Titans.

“Damien Cook goes straight to Latrell Mitchell on the charge,” Russell said after Mitchell scored the first try of the afternoon.

“He is too big and he is too strong. Latrell Mitchell surges over for his 10th try of the campaign.”

“That’s too easy there for Latrell Mitchell,” Roach said.

“You have got to put a lot more pressure on him than that. You try and legs tackle him and he will just bounce over the top of you.”

Mitchell became just the second man to score seven tries in seven straight games against the Gold Coast and Corey Parker pointed out that it mirrored the record breaking nature of this team in 2021.

“What about the attack and potency of this team the South Sydney Rabbitohs?” Parker said.

“There is none better over the last month scoring upwards of 45 points a game.

“Latrell Mitchell has now scored in all seven of his games against the Gold Coast Titans,” Russell said.

“10 tries in total. It is his best strike rate against any opposition.

“The only man to score in seven straight games against the Titans before today was the great Manu Vatuvei. Now Latrell joins him.”

With their last try of the game the Rabbitohs broke their own club record for most points in a season which was 687 in 2014 now surpassed by the 688 in 2021 with three games still to play.

It hasn’t quite been the Aaron Rodgers’ revenge season against the Green Bay Packers, but Adam Reynolds continues to make Souths look silly for not keeping him.

The Broncos bound halfback looks focused on adding a second premiership to his resume before he departs and he is smashing all sorts of point-scoring records along the way.

Reynolds produced a superb try in the first half and converted for his 100th goal of the season as he extended his lead atop South Sydney’s all-time point-scorer’s list.

Matt Russell and Corey Parker lauded Reynolds’ goal-kicking exploits after he came up with a freak try in the first half, while Steve Roach called the decision to let the local junior go shocking.

“The pretty in pink Adam Reynolds comes through on a live ball, scoops it up one-handed without knocking it in to Brian Kelly and goes in for the try,” Russell said.

“Have a look at the pick-up there from Reynolds just brilliant,” Roach said.

“That’s class and he improves the position to make his goal kick easier.”

“There is a real purpose to what he is doing this season,” Parker said.

“It is the most points Adam Reynolds has scored in a season in what is going to be his final season in the red and green.

“This kick will be his 100th goal of the season. A ton. Raise the bat. 100 goals in a season. What an effort. What a season he is having, what a player he has been.”

“What a goal-kicker. What a point-scorer. What a servant for South Sydney.

“I can’t believe they are letting him go.”

“Don’t start me I can’t believe it,” Roach said.

“Not only that. Add a couple of things to it. A brilliant goal-kicker, a brilliant player and also a local junior.

“Hello! How would you let him go? Shocking decision.”

Relive all the action in our blog below. Can’t see the blog? Click here!